From Rwanda to UNT 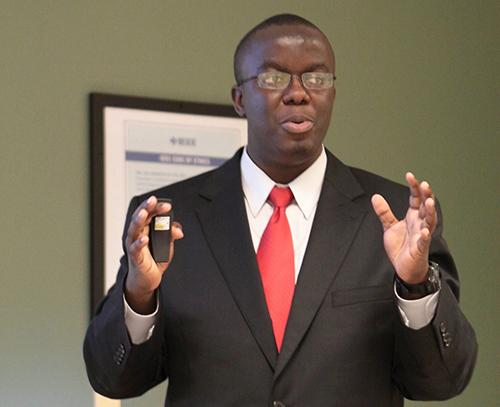 Patrick Kamongi recently received his Ph.D. in computer science and engineering and plans to graduate from the University of North Texas at this December’s commencement ceremony. After he walks the stage, Kamongi has been offered a job as a post-doctoral researcher at the National Institute of Standards and Technology, NIST, at their headquarters in Gaithersburg, Md.

When Kamongi was a child, he would visit his father at work. His father, who earned his master’s in France, was the director of the IT department at a national bank in Rwanda.

“My earliest memory was when I was three, my father took me to his work, and I remember typing on his computer,” Kamongi said. “That memory kept me wanting to learn more about computer science.”

At the end of high school, Kamongi was part of a group of students from Rwanda picked to be able to come further their studies in the United States. Kamongi was given a full ride scholarship to the University of Arkansas at Little Rock where he earned his bachelor’s degree in computer science.

“Undergraduate was cloud nine,” he said. “But the key was keeping that pace learning new stuff.”

After finishing his bachelor’s degree in Arkansas, Kamongi made the decision to come to UNT for his graduate studies.

“When you join here, you get to be your own individual,” Kamongi said. “You get to build your own agenda through your advisors, and it makes you feel like you are contributing. That is what is really rewarding.”

While at UNT, Kamongi has worked many roles as a graduate student. He has been a teaching assistant, teaching fellow and research assistant. He is currently working as a research assistant under Professor Krishna Kavi. Kamongi has worked on software that does assessments on things like vulnerability in programs. Currently, he is working on maintaining the software and writing papers on his research with it.

One of the things that Kamongi has enjoyed about being a graduate student at UNT is the exposure the work he has done can receive. He has had the opportunity to travel and network with many important people in the industry from around the world. He says his job offer from NIST is the result of networking.

In the long term, Kamongi has the goal to be able to service others somehow, whether it be through his research, teaching, community engagement or being able to create scholarships.

“Life of service is something that I want to dedicate my life to, but how exactly? I’m finding it,” Kamongi said.