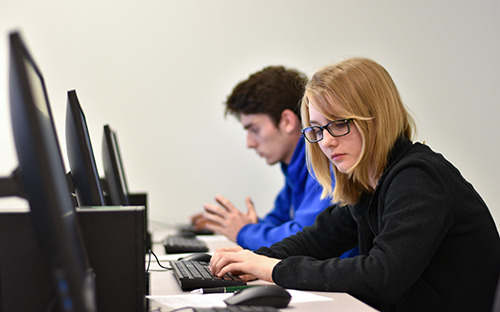 The UNT College of Engineering was recently ranked 16th nation-wide and second in Texas by The Chronicle of Higher Education for enrolling and graduating women in computer science.

The Chronicle’s “Which Colleges are Best and Worst at Enrolling and Graduating Women in Computer Science and Engineering?” list recognizes the efforts made by public institutions who have sought to increase female enrollment and graduation within the two fields. For the Department of Computer Science and Engineering, 24.8 percent of their graduating students were female in 2016-2017, a 4.8 percent increase in female representation since 2009-2010. Nation-wide, only 18 percent of computer scientists and engineers are women.

“It’s been really great to see more women in computer science and engineering as a whole,” said Barrett Bryant, department chair. “I know that we at the college and in the department very much value the diversity of our student population and love seeing not only what our students accomplish here at UNT but also what they go on to do after graduation.”

Bryant says the BRAID (Building, Recruiting And Inclusion for Diversity) project, funded by a consortium of companies, including Intel, Microsoft, Qualcomm and IBM through the Anita Borg Institute, has been instrumental in their efforts.

“The BRAID project seeks to support computer science departments by helping them implement changes that increase the percentage of women and underrepresented minority students,” said Bryant. “It’s definitely been a big part of our efforts.”

UNT is one of 15 universities that is part of the BRAID project.