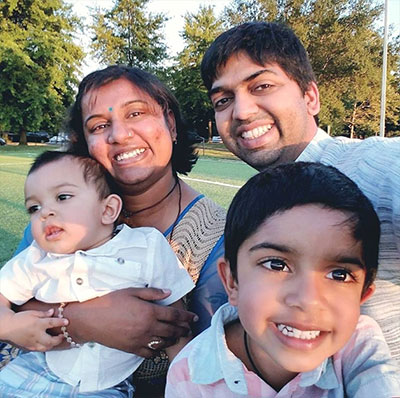 Dushyant Vipradas and Siri Yenigalla were both master’s students in the Computer Engineering program from 2006-2007. They met at UNT in Denton and they have a lot of fond memories here. They both graduated in 2007.

Siri joined the Indian Student Association as the PR representative in Spring 2006 and eventually became president later. Part of her job was to make sure new students have a ride from DFW to the university campus. That’s when she first exchanged emails with Dushyant when he was about to arrive for the summer semester and sent a picture for identification at the airport. When she first saw the picture, she thought to herself that he has enormous eyes.

When Dushyant reached the university, he came to her EE lab where she was working as a research assistant to thank her for her help. She fell for him the first time she saw him and loved his eyes. Eventually, it was mutual. Siri said it was a funny story that all of his four roommates, including him, got married to the girls who were from UNT and happened to be roommates at one point of time or other. Three of the girls had their first child the same year as well. Siri says their get-togethers have been really fun.

Dushyant got a job in New York even before he graduated. As they wanted to stay closer, he eventually moved back to Dallas and joined Nokia as a software engineer working on embedded systems. Siri worked in a couple of startups as a User experience (UX) design consultant before she came back to Dallas and joined Verizon as an Information Architect. By the end of 2010, Nokia had a significant change in their work, which made them move from Dallas to the Bay area.

That move helped them build their careers and also their family. Siri joined full time with Eveo, the health care ad agency. That position lead her to join Sony entertainment and then she landed in her current job as Senior UX Architect in Vudu. Vudu is a movies and TV transactional video on demand company which is owned by Walmart and has the highest movie and TV collection available. Siri’s office is in Sunnyvale.

Dushyant worked for Nokia for few more years before joining his current company, Samsung Research America. He finished his MBA in between so he became a product manager after being a software engineer. His office is in Mountain View. Their workplaces are two miles apart, so they carpooled a lot. Now that they have two beautiful children, Jasith, 4.5-year-old, and Mayan, 1.5-year-old, they go in separate cars as they have to work around different drop-off and pick-up schedules. Though they go in separate vehicles, they end up talking to each other while commuting every single day.

Right now both Dushyant and Siri are creating and building exciting new products for their respective companies. Dushyant spoke at the Samsung developer conference this year because of the successful work he has done. Other than enjoying their work, they manage to have fun with their friends. During their holiday breaks, they mostly have get-togethers with their master’s program friends, and relive their UNT days by talking about all the things they have done in the university and the stories never get old. Siri says, "UNT holds a special place for us and we love the time spent when we were at the university."