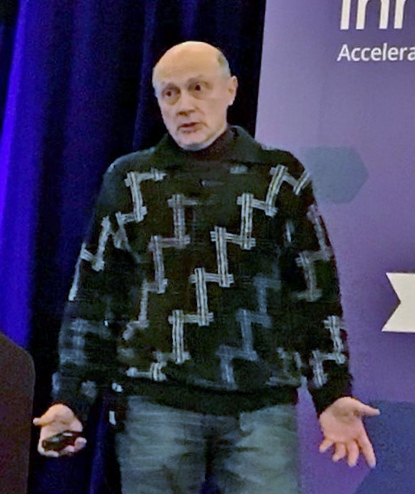 My story begins in the summer of 1991 when my family and I were new immigrants from Russia trying to adjust to a new life, learn English, and get settled in Boston, MA — our first destination in the United States. I had applied to UNT along with a few other universities while still in Russia, but not fully understanding the admission process and not even being able to pay application fees filtered me out of consideration by many. By the time we arrived in the US I had little hope to continue my education and started looking for a job.

It was hard. The degree I had, a rough equivalent to MS in EE, was not fully recognized in the US, my English was poor, interviewing required skills I didn’t have, and even putting together a resume was a big challenge. I was starting to get quite desperate and on the off chance that I might still be accepted somewhere decided to try my luck again and call the universities I had applied to. Predictably, the responses were polite but negative, until I called UNT and Mary Grumbein’s soft voice asked, "Why aren’t you here? Registration ends tomorrow. We have all been wondering where you are." I felt my heart skip a beat.

It turned out that my admission paperwork had been mailed to my Moscow address, of which of course I knew nothing. I had also been granted a graduate assistantship, without which I would not have been able to pay tuition. We were refugees with no assets, no source of income, and not even enough money to get to Texas. There was no way I could be on campus the next day. Stuttering, I had to tell her that I couldn’t pay for my tickets or for a place to sleep even if was able to get there somehow. She paused and said that she would see what she could do.

The rest happened like in a Hollywood movie: the airplane tickets were overnighted to me and the next morning I was on a flight to Dallas. A college student was waiting for me at the airport to take me to Denton. My class schedule had already been put together and I was taken around campus to complete the registration paperwork step by step. A foldable foam mattress was waiting for me on the floor of my new roommate’s apartment. The magician behind all of this was Dr. Paul Fisher, the CS Department Chair at the time. The guy picking me up at the airport was his son Craig and my new roommate was Craig’s high school friend. To this day I’m overwhelmed by what this man has done for me, a complete stranger from another country. If not for his kindness, generosity, and guidance throughout my student years my life would have turned out to be completely different.

Then it was time to put my nose to the grindstone. My English was barely enough to have passed the TOEFL. My first classes sounded like balalaika solos – I could not understand a single word. I had to make Xerox copies of text books because I couldn’t afford to buy them and I had to write the Russian translation between the lines before I could understand the meaning. My wife, my 4-year-old son, and my parents stayed back in Massachusetts. I remember feeling really scared that if I failed I wouldn’t even have the means to get back to them. When Dr. Fisher found out I had a family he literally ripped into me for leaving them behind. With his help they were able to join me in Denton three months later.

The amount of support I received from the faculty was tremendous. Dr. Paul Fisher, Dr. Frank Vlach, Dr. Farhad Shahrokhi, Dr. Ryan Stansifer have all played a major role in my development as a Computer Science professional and in many ways as a person. My gratitude to these people has not faded in 25 years.

I graduated three years later having completed first my Master’s and then my Doctorate in CS, and in September of 1994 I got my first job in the US working for Bell Northern Research/Northern Telecom in Richardson. We moved to Plano and bought our first house.

I worked for Nortel for 15 years first as a designer and then as an architect, until the company disintegrated in 2009. These were relatively steady years. My son grew up and for his last years of high school decided to go to TAMS. It was a déjà vu experience for me to come back to UNT as a TAMS parent. I remember how my son suddenly stopped in front of the Student Union and said, "Wait, I remember this place. Wow, it was so big!" I told him how he often played there as a little kid while I was studying.

After the Nortel bankruptcy and three uninspiring years at Cisco I joined the US Research Center of Huawei where I have been working for almost 5 years now as a Principal Architect. My team generates ideas and creates innovative technology to improve the efficiency of tens of thousands R&D engineers internationally. It’s a lot of pressure but also a lot of fun. I get to travel to Asia and Europe, share ideas, participate in workshops, speak at conferences, collaborate with others in the industry, and of course architect, design, and write code. My son is now a physician practicing Internal Medicine in Omaha, NE.

Last year I got the honor of being invited to sit on the Advisory Board to Dean Costas Tsatsoulis, so I’m back at my Alma Mater again. Along with other board members we were taken on a tour of the new College of Engineering building at Discovery Park. So much had changed. The familiar traditional ambience of the main campus and the GAB gave way to a much more modern feel of the state-of-the-art facility. It was very impressive to see these changes, and even though no one is completely immune to at least some nostalgia for the past, I’m excited to see what the College has now become and I look forward to once again being involved in its life.