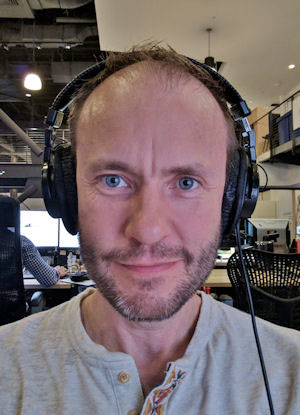 I started at UNT in 1985. I have fond memories of working in the computer lab, wearing a red vest to identify me as hired help, and helping students who just had to get through CS 101 to meet their degree requirement. It was a lot of fun. I also worked at IBM in Southlake, TX where I traded the red vest for a tie.

I graduated UNT in 1990 with a BSCS in Computer Science, and started my first job at Ericsson Network Systems a few days later. I was prepared to spend my work days indoors in front of a computer, but to my surprise, I was almost immediately sent to Norway for five weeks. That was just the beginning; my career at Ericsson opened the world to me in terms of the places I traveled, people I met, and my perspective of our place on this planet. There were some cool problems solved along the way, and products created with some really smart people too. In 2002, I moved my family to Stockholm Sweden, so I could work at Ericsson’s headquarters on 3G cellular and VoIP projects.

In 2004 I decided to take my family back to the USA, and landed a job at Microsoft in Seattle. There I worked on Microsoft’s business communications platform, which gets a new name every three years. It was called Office Communications Server (OCS) at that point in time. The nice thing about Microsoft, is it is a company that does a lot of different things, and so after leaving my mark on OCS 2007, I found an opportunity to follow a long held dream and work in the video game business. Shortly after my 40th birthday, I joined the Xbox team.

At Xbox I helped create a system that allowed indie game developers to self-publish their games on the Xbox 360. It was the first time a video game console opened their system and their market to anyone who wanted to be a game developer. My colleagues at Xbox created the XNA Developers Studio along with tutorials, examples, starter kits, videos, and everything else they could think of to get indie developers started. I was really proud to help bring the joy of game creation to eager developers and enable them to put their creations into the hands of millions of people. We went on to adapt the same system so musicians could get their songs into the popular play-along video game Rock Band via Rock Band Network.

In 2013 I joined Bungie to start my current job. Back then it was to work on the then secret project "Destiny." Since then Destiny has launched and been played by millions of people for billions of hours. Earlier this month Destiny 2 launched and is set to be even bigger than Destiny. My team is responsible for the website and (iPhone and Android) apps that help players find their way in the game, manage the huge amount of armor, weapons, and dance moves they accumulate, as well as communicate with other players. Bungie has about 700 employees doing everything from game engine development, hard core 3D graphics, real-time game networking, and audio engineering, server engineers, mobile app developers, and testers. Add to the mix dozens of artists, animators, game designers, composers, musicians, fiction writers, story tellers, voice talent producers, community managers, translators, marketing, and merchandising. It is an amazing place, full of talented and passionate people, and so far my favorite place to work.